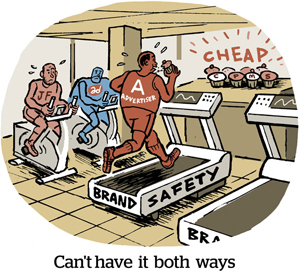 Digital publishing is in a period of self-reflection. Instead of bragging about mass reach, the new standard will look to rational numbers to gauge reach and readership, writes Brian Morrissey, former president and editor of Digiday who now writes a Substack newsletter called The reboot.

The heady days of Facebook News Feed and social distribution — when reach and engagement numbers were tenuous at best, coupled with the series of retroactive acknowledgments of inflated metrics — have been replaced by more mature considerations, like a quality audience that can generate online subscriptions.

There is still room for magic accounting, so to speak. Information and entertainment companies brag about subscriptions without acknowledging when many or most accounts are actually on heavily discounted or free trials, and are likely to unsubscribe. Sometimes publishers tout the total number of subscriptions when it’s actually people who provided an email address, not people who make a recurring payment.

The current moment of self-reflection will be a healthy transition for online publishing. Growth-obsessed, venture capital-backed media will be replaced by narrow-minded outlets that can generate profits without claiming to reach the majority of American adults.

“Outside of CNN, no publisher brags about its ComScore reach,” writes Morrissey.

The third part of the report was released on Wednesday, Digiday reports.

The most obvious way the IRM encourages change (and participation in the platform – LinkedIn did not respond) is to award a gold star to the company that has most improved its platform by the standards. of the report.

And wherever there is a winner, there is a loser. In this case, that means Facebook, which is on the hot seat for recent breaches.

Obviously the idea is still in the works, but it’s one of many recent efforts by agencies to tackle brand safety on social media, or even just to organize social platforms in a sort of of order.

All new to this

More and more brands are recruiting and launching media operations internally. Simply put, more and more marketers are realizing how easily they can hire disgruntled, underpaid journalists to work on the corporate side.

This is especially true in B2B media, where there is a booming business information industry and many freelance consultants. But companies like Netflix and Shopify are also investing in newsrooms or self-proclaimed editorial operations.

These are not doomed to failure. Far from there. But there will be growing pains.

On the one hand, investing in a news operation is a long game, writes Shareen Pathak, another former Digiday editor who co-founded a publishing consultancy Tool boxes.

These fledgling brand-backed newsrooms tend to fall under the marketing organization. And marketers are used to rigorous ROI on all spend, sometimes even with zero-based budgeting.

“Patience and the will to keep going can pay off,” writes Pathak. It doesn’t seem like a good choice for marketers, though.

“This can be especially challenging for brands with strong marketing muscles, who operate with a launch-focused mindset.”

Roku partners with Entravision to bring its business to Mexican markets. [release]

FreeWheel, owned by Comcast, has rolled out its own partner certification program. [release]

Why Netflix needs to buy another streaming service. [The Information]